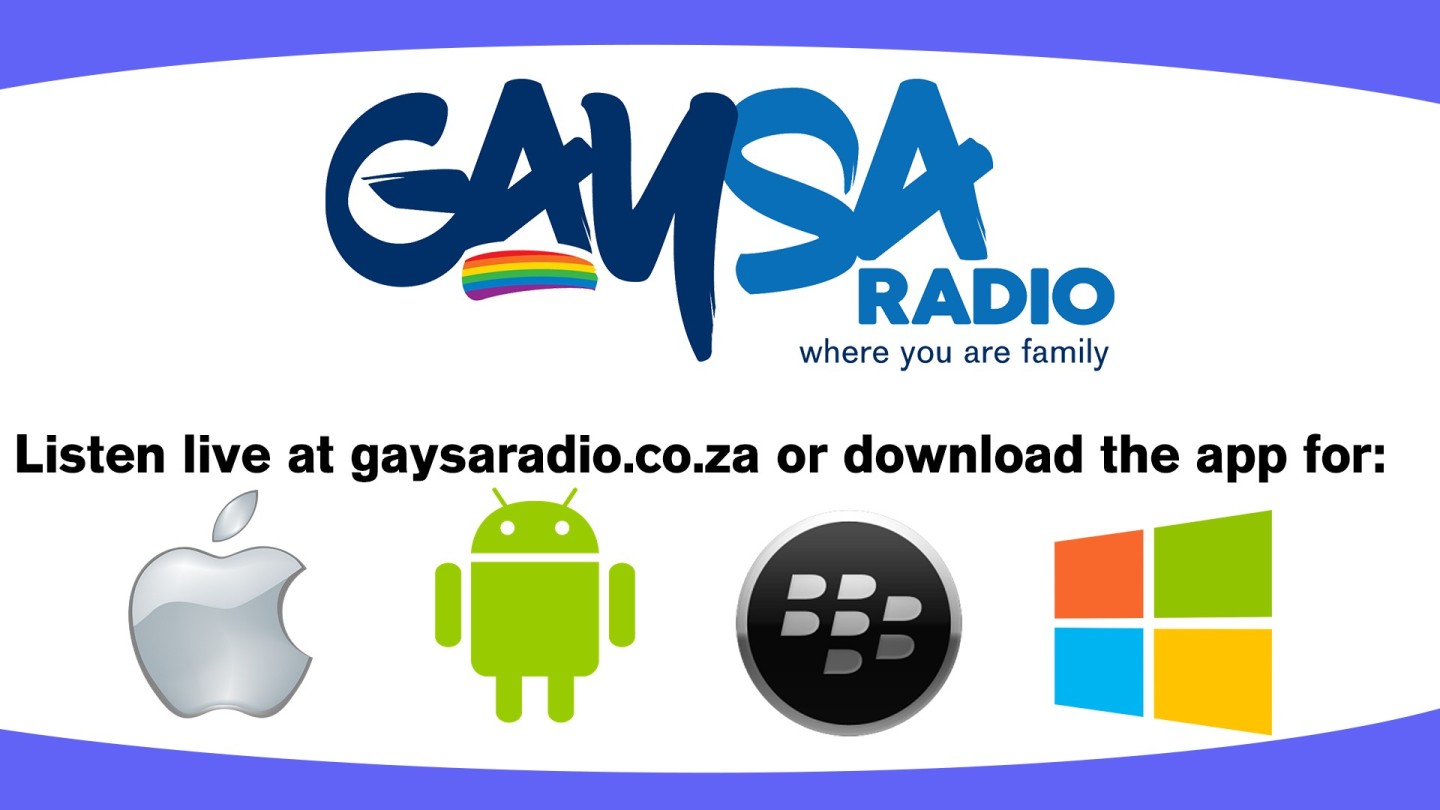 Gay SA is an online (streaming) live radio station focusing on LGBT and related issues. Click this link: http://www.gaysaradio.co.za/ for more information or to listen to them. Alternatively you can download their app from the relevant app stores. Support Gay SA Radio. Listen today. Watch out for a profile of the station coming to Daniella's Ramblings soon.

July was a busy month and no sooner had it started than it was ending. Before the month was done with me, I found myself in Cape Town on a business trip. As always, I used this as an opportunity to get some much needed en femme time in.

Due to some delays in getting meetings confirmed, I was a little late booking tickets and accommodation. Fortunately, Cape Town is quiet at this time of year and I found flights to be available and not too expensively priced. I was also happy to see that my (now) preferred accommodation, a holiday apartment, in Seapoint was available, so I hurriedly booked flights, accommodation and a hire car.

My flight to Cape Town was on the Wednesday evening and I was due to arrive in Cape Town at 8 pm. This was a bit of a problem as it necessitated a late check-in at the apartment, but the owners were very accommodating, they just asked that I let them know when I was at the airport so that they could be ready.

I decided that, as I was flying down after work and would have the evening to myself, I could be a little adventurous. I have long thought that ‘flying pretty’ (flying en femme) is just too stressful. There is just too much that can go wrong. Security could be tricky and could just result in far too many questions that could result in a missed flight. But I decided that as I could dress as casually as I liked that I would be slightly androgynous (is that even possible?), something I have done before, but never in an airport. So, I showered and shaved, pulled on my ladies cut, boot-leg Levis, cowboy boots, a shirt and my blue blazer.

I felt good! I grabbed my substantial suitcase (business attire could have fitted into a small tote bag, but my other clothes, accessories and paraphernalia took up a largish suitcase. The big win of dressing in femme attire from the waist down, was that if I wanted I could do a quick change of the top half of my outfit, do some makeup and pull on the hair and be fully en femme in say 30 to 45 minutes, thus giving me a whole additional night to be myself.

I called my Uber and arrived at the airport with plenty of time to spare, so I was able to have a meal at the airport whilst waiting for my flight. The flight down was uneventful and I was even able to catch up on some long overdue tasks. We landed at Cape Town on schedule and without incident. Happily, my luggage was one of the first on the baggage conveyor belt and I was at the car hire company within a few minutes. I texted the apartment owners and said I would be with them shortly.

Everything was looking good and I had even been invited to a meal with a group of people I knew online. It seemed I would be able to join them after their meal for dessert or coffee or something. Happy days.

Then things started to go a little Pyrus communis shaped. My car was reserved and ready for me. I handed over my credit card to pay for it. The cashier debited the rental fee and all was good. Then she tried processing the deposit. I got a message on my phone, from the bank, asking if the transaction was legitimate or fraudulent. There was an automated process to follow, which I did, confirming that the transaction was correct and should be honoured. Unfortunately, the bank’s system failed and the transaction was declined and the bank put a fraud hold on my card, effectively blocking it. I called the banks call centre. After a very long wait I got through to someone and they said they had reversed the hold. We tried transacting again. Blocked. Rinse. Repeat. Rinse again. Repeat Again. You get the idea… After multiple call centre interactions and attempts to process the transaction, I gave up. I told the car hire firm to cancel the reservation and decided to Uber to my apartment.

By now it was after 9 pm. I cancelled my appointment with my friends and called the owners of the apartment and apologised profusely. Once I had explained the situation they were very polite and understanding. We arrived at the apartment and my host let me in. She was a little confused and asked where my colleagues were. Problem! I had inadvertently booked two apartments, I have no idea how that happened. She was fine with it as occupancies were low. I handed over my credit card to pay for the apartment. Declined! Clearly the fraud block was in effect. Luckily, I had a debit card and that worked fine. I unpacked, attended to some e-mails and fell into bed. Exhausted.

I woke up early the next morning and after showering dressing etc, headed to a local coffee shop for a spot of breakfast. I tentatively handed over my credit card. It worked! Great news, I was set for the day. Now I called an Uber to take me to my first business meeting. Uber messaged me in the app to say I owed money for last night’s journey and I could not ride until that was paid. I called the bank… They said all was fine and I should be able to transact. I tried reloading the card on Uber, loading another card, paying by cash but Uber would not let me ride and I could find no solution to the problem on the app. After nearly two hours of struggling I went into my apartment, fired up my laptop and visited Uber’s site. There I found the solution and once I had jumped through the right hoops, my Uber arrived. Needless to say, I had completely missed my first meeting.

The rest of the day went well (apart from a truly appalling cup of coffee at a KFC, top tip: do not drink coffee from KFC, seriously, just don’t) and I was able to get back to my apartment and get ready for dinner.

It was chilly and I wore a pair of skinny jeans, my black top, a brown leather jacket, a nice warm scarf and my trusty cowboy boots! I thought I looked good.

You will notice that I am showing very little skin. Once the scarf and jacket were on there was almost no skin showing at all. This is relevant for what happened next.

Being without a car and just a short walk away from several restaurants, pubs and bars, I decided to take a walk down the main road to find a place to eat. It was also a cool but rather pleasant evening and I wanted to get a quick look at the sun as it set over the Atlantic Ocean. As I came to the corner of the main road and the street that my apartment was in I was casually, sexually harassed. This is never a fun experience, but I think transgender people are more conflicted about this than cisgender women. On the one hand it is very scary, on the other it does affirm our presentation. On balance, I find it far scarier than affirming. I also found it very strange as I was not exactly revealing much or dressed in an overly sexy way. Anyway, I didn’t let it ruin my evening, I was very glad for my pepper spray in my pocket though!

I saw a beautiful sunset from a road parallel to the beach and I then headed back to the main road (one block away).

After a short walk, I found an authentic looking Italian restaurant/pizzeria (more trattoria, than restaurant to be honest but I prefer that). I wanted to be sure of my choice so I walked up to the other end of the street and back down. The Italian place looked like it was most to my taste. Although, there were a number of very tempting places to eat.

I walked into Pizzeria Napoletana and I felt comfortable from the start. The front of house was very professional and addressed me ‘correctly’. I had a lovely table at the front of the establishment and could see a number of comings and goings. I was very happy to see that the authentic look and feel of the decor was replicated in the service (fresh bread was served as I sat down) and the menu. There was (of course) pizza and pasta, but there was also a selection of food from all around Italy, including Venetian liver and onions. I ordered that because Viva Veneto! I also had some mash potato and vegetables. The food was excellent.

I then ordered tiramisu for dessert. Tiramisu can be a bit variable. It is often mass produced and gelatine is sometimes used to help stiffen the egg whites. This was fresh, home-made and I could find no trace of gelatine. It was delicious! I capped off the meal with an espresso and a very content Daniella made her way back to the apartment. But not before being harassed by the guys on the corner again.

The rest of the trip was much happier than the first morning and I was happy to come home being able to say that despite the early signs the trip was indeed a success. Thankfully my bank was able to fix my credit card problems and the Uber problem was also fixed. If you ever find yourself in Seapoint I can definitely recommend Pizzeria Napoletana to you. Buon appetito!