Being the sophisticated social butterflies that we are, my spouse and I decided it would be fun to invite some of our nearest and dearest friends to a dinner party at our house to celebrate the end of 2018 and the start of the Christmas season. We settled on a weekend and invited a number of our friends, asking which day would suit them best. The feedback and our own schedule coincided happily and we decided to host the party on a Friday evening.

Happily, one of the girls’ grandmothers invited them to a nativity play (the eldest was less than enthusiastic; being one, 11 years old and two, an avowed atheist, but she good naturedly tolerated being dressed as an angel for the night). This meant they could sleep over at a grandparent’s house and we could happily host away.

Now the only problem was that my fledgling media distribution empire had just signed not one but two new newspapers that were launching that Friday morning. This meant that I spent the Thursday night at the printing press supervising printing and dispatch operations (I love work, I can watch it all night long) and much of Friday was spent monitoring field activities, dealing with complaints and queries and generally fussing over the new ‘baby’. I had got to bed after 2 am and was up at 6-30 am. Bright eyed and bushy tailed I was not.

Fortunately, forward planning is what we do best. So, we had made our two lasagne sauces (one vegetarian and one meat) earlier in the week. We therefore only had to set the table, make the bechamel sauce, grate the cheese and do a final construction of the pasta al forno. This was all achieved by my spouse whilst I was running around dealing with newspaper related issues. The girls were deposited at the grandparent and we were able to get ready.

After a long and busy week taking Friday afternoon off to have a long luxurious and relaxing bubble bath was a real treat. This being self-employed malarkey, whilst hard work and stressful certainly is not without its perks! Now what to wear? It was a dinner party, so I decided to glam up. I have not had many opportunities to be glam lately: When I first started going out en femme every  outing was an opportunity for bling and stilettos, but now that it has ‘normalised’ I like to ‘blend’ as much as possible so now even a trip to the theatre now requires less glamorous attire than a trip to the mall used to entail… So, the opportunity to glam up a little, even if ‘only’ at home was most welcome.

I was clearly feeling very patriotic towards my adopted ‘homeland’ (I am an Italian citizen by virtue of marriage) as I had selected three dresses to choose from, a green, a white and a red dress. I had a little giggle, but I was truly torn regarding which one to wear. Then I hit upon a fun idea. I would wear the rather glamorous (and ever so slightly revealing) white dress I had last worn nearly 4 years ago. I could then do a ‘who wore it better’ comparison between early 2015 me and late 2018 me… The lack of sleep was clearly showing.

I donned the dress and my amazing spouse was kind enough to do my makeup for me. We had no sooner finished the makeup than our first guest (my very good friend Anna) arrived. Eek I was not ready. My spouse went out to meet and greet while I did my nails and sorted out my hair and jewellery. I was ready. At last. I felt fantastic but I had literally no idea how I looked as I had not had a chance to look in the mirror. I went out, met Anna in the lounge and prevailed upon my spouse to take some photographs. Unfortunately for me it would be another 24 hours before I could see them, but luckily for you, you get to see them right now. 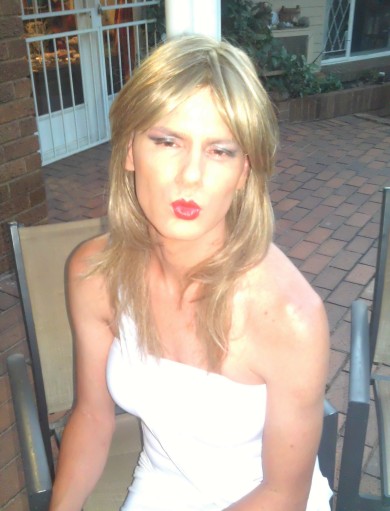 By way of comparison, here are the photographs, of the same dress, from early 2015:

Well, who do you think wore it better?

Anyway, back to more interesting matters…

Soon, more guests arrived and we were soon chatting away nicely. Sadly, one of our guests was unable to make it but seven out of eight people isn’t a bad return. It was lovely to have everyone together in a relaxed and friendly environment. The conversation flowed freely and everyone was getting along very well.

It seems that the food was enjoyed by everyone and the dinner table conversation was amusing and stimulating. Dessert was ice cream with homemade chocolate sauce. I thought it was scrummy. Coffee was served and after a fun filled evening our guests negotiated their way down the tortuous driveway.

A big thank you to everyone for sharing a fun filled Friday evening with us especially as I was able to use the occasion to celebrate (somewhat quietly I will admit) the successful launch of my media distribution business’ first clients. An auspicious occasion.