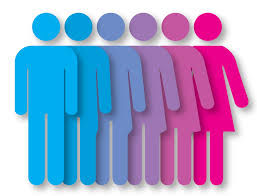 Right, so in South Africa we have this thing called the Daredevil Run. It is a mass participation road race event to promote awareness of ‘male cancers’. The gimmick is that the participants run through the town clad in a purple Speedo swimming costume and the footwear of their choice… Nothing else.

So far so good. I am all in favour of people doing something, no matter what it is, to act. If it is viable and useful it should survive and flourish. If it is in fact useless, it will flounder. If your intentions are good, and you manage to do good I am with you.

However, there are some serious issues with this event. When investigating the event, I saw that it ‘is a special event for our boys and men only.’ I challenged them about this on their Facebook page asking (politely) why this was so. I pointed out that the many ladies’ races held in South Africa allow for men to enter (as a bit of fun, especially if they were in some sort of female attire, yes this could be viewed as problematic, but it is better than a universal ban in my opinion). I also pointed out that it was not like men needed ‘safe places’ where they could function free from mass sexual harassment from women. The official Daredevil Run Facebook account replied to me:

Hi Daniella, ladies are more than welcome to cheer along the route as the Hollard Daredevil Run aims to raise awareness of male cancers by painting the streets purple in nothing but Speedos 🙂 We value all the women in our Daredevils’ lives and would love you to join us on the day as a supporter. The more the merrier! Hope to see you there!

Clearly, I was to know my place, on the sidelines, cheering all the manly men on in their manliness. Presumably it would have been appreciated if I would swoon and gasp at the manly bulges in the Speedos every now and then as well.

So, I get that some of you will agree with the Daredevil Run organisers and say but of course they are promoting awareness of and fund raising for ‘male cancers’ so it makes sense that men and only men should run. I take exception to this on a number of levels.
Firstly, this is clearly binary thinking. They do not seem to have considered that there are transgender people in this world and there is no mention of them in the rules or the FAQs.
Secondly, they seem to have missed the point that ‘male cancers’ (is there even such a thing as a ‘male cancer’? Answers on a postcard please) don’t only affect males/men. Transgender women can certainly be affected by ‘male cancers’. Even in the case of a person who has undergone reassignment surgery, the prostate is not (usually?) removed, so these people most certainly can develop prostate cancer. Pre, or non-operative transgender women may still have organs, such as the testicles and penis, intact and as such they can also develop cancers of these areas. So, by excluding women, in the desire to promote awareness of ‘male cancer’ the organisers are certainly excluding possible sufferers of these self-same cancers.
Thirdly, what about those women whose male partners, family members, friends etc have had a ‘male cancer’? Surely these women have a right to do something as well?
Finally (for now), this is simply a discriminatory practice.

We are living in the twenty first century. There is simply no place for discrimination in our society. The tone of the response to me left me feeling insulted. I was clearly being told that I should know my place and that my place was on the sidelines, supporting the participants.

And here is the thinking that lies at the heart of patriarchal, misogynistic and sexist thinking. Men are deemed to be participants in society, women must be the observers and the observed when subject to the male gaze. It was not that long ago that Kathrine Switzer was physically assaulted as she tried to participate in the Boston Marathon. As long as attitudes like these displayed by the Daredevil Run are in play, our society will continue to regress.

For me this is a true gender issue that we should all be able to unite behind. It is an issue that directly affects the transgender community, women, all feminists and their allies and indeed men. The rest of the LGBT community may also see how we are being discriminated against here. Surely the more people participating, raising funds and raising awareness the better?

What are these men so afraid of? Just how fragile are their masculinities if they feel the need to exclude women from their race? I understand that the gimmick is the Speedo thing. So, all they need to do is say that participants must be in a Speedo or a bikini (if necessary). This is not hard. I fully understand that a number of women (both trans and cis) may not want to run through the streets, surrounded by men, clad only in a bikini, but that is a fight for another day. The point here is that there is no rational or justifiable reason to exclude women from this event. We know our own minds and should not have our agency taken away from us.

I would love to see you all contacting the organisers and asking what they are afraid of and why they are excluding more than 50% of the population from their efforts.
Their Facebook page is here: https://www.facebook.com/DAREdevilRun/
Their e-mail address is daredevilrun@hollard.co.za
And I will be contacting their sponsors, The Hollard Insurance Company, via Twitter (@Hollard) asking them about their views on gender, gender equality and non-discrimination in the 21st century.