In February we were invited to another transgender person’s birthday party at a friend’s house. It seemed that, for once, the planets were aligned in our favour. Both my spouse and I liked the company of the birthday girl, we had been thinking an outing was long overdue and our eldest daughter had been invited to a friend’s house for a sleepover on the night in question. This meant that we only had the one daughter to farm out to willing grandparents. Result!

We made all the necessary arrangements. We went shopping and found some cute birthday presents for the birthday girl. Saturday finally arrived and my spouse duly delivered the girls to their sleepover and to the grandparents respectively. While she was out I got as ready as I could and made as many preparations as I could.

I decided to wear the new skirt I had purchased towards the end of 2016 but had not yet had occasion to wear. I opted for a black nude shoulder top and black boots. I was lucky in that my spouse had time to get herself ready and do my makeup for me. Whilst I can ‘get by’ with my own makeup she is an actual makeup artist and is able to do far better work than I can ever manage. She did an amazing job and I felt like a million bucks! They say a picture (or in my case five pictures)  is worth a thousand words, so here goes: 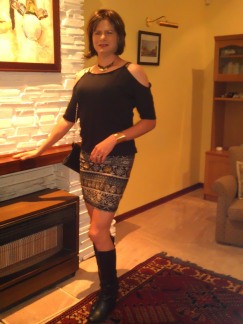 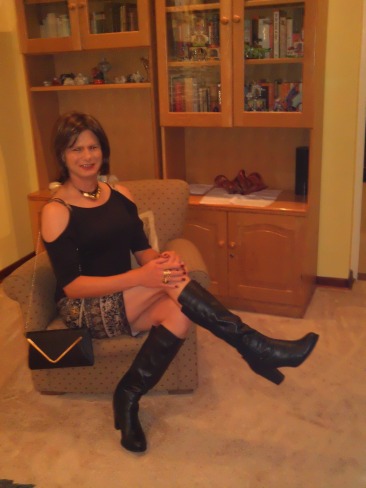 I really liked the way I looked and I was particularly impressed with her ability to give me some ‘showy’ eyes (winged). Not only do I have small eyes that are tricky to work on, I also have something of a phobia about my eyes and find it difficult to have people work on them. She has the patience of a saint and is really very good at what she does.

After the obligatory photo session we left for the party. We were already running a little later than expected and to make matters worse, my iPad took us to the wrong address. We arrived at what the iPad said was the correct place but the house looked deserted. Their was a party on the go at the house next door and at first I wondered if the address we had been given had been incorrectly typed in error.  I almost went in to the house with the party but thought it would be better to check. So I phoned our  hostess. Fortunately I did so. We were indeed at the wrong address. Having got directions we headed off to the correct house which was, fortunately, not far away.

We arrived at the house and found the party in full swing. We said our hellos, had a drink and met a few new people and some old friends. We were having a very nice time talking to everyone and were enjoying ourselves. Then we got a phone call. Our eldest daughter was very upset and wanted to come home. We tried calming her down and said she should see how she felt after a while. After about ten minutes we called our daughter’s friend’s mother and she said we should probably come and fetch her. Oh dear!

I had not brought any emergency contingency (boy) clothes with me. To make matters worse, as we were running late, we had left the house in something of a state. My stash of shoes, clothes, makeup, wigs etc were all in plain sight! What were we to do?

My spouse said I should stay at the party and that she would go and fetch our daughter; I would take an Uber home. This seemed a fantastic idea. A dense fog had descended over the northern suburbs of Johannesburg and she had a rather scary drive to fetch our daughter and then an even scarier on home. On arriving home she told our daughter to stay in the kitchen while she cleaned the bedroom up. What our daughter must have thought we had got up to, I do not know!

My lovely and very caring spouse put a bag (for my clothes, wig etc) in the study and my pajamas in our daughter’s room. Our little girl was so distraught that she had to sleep in our bed. I stayed at the party for a while, but, as usual, was missing my spouse and after an hour or two decided it was time to come home. I said my goodbyes and called my Uber. Disaster! I had had to change my credit card a few months ago as it had become faulty and I had not updated the credit card details in the Uber app on my phone. Uber would not come as the credit card details were incorrect.

Fortunately our host (the birthday girl’s partner) and another guest came to my rescue and offered me a lift home. The fog was very dense and the drive home more than just a little scary. We arrived home safely and we said our goodbyes.

This just goes to show, always have a contingency plan. If something can go wrong, it often does! Also, always keep your financial details up to date. You never know when you will need to make use of a facility and if it is not up to date you may be left in the lurch. Finally it is a good idea to have a bag of clothes with you at all times. You never know when you may need to change. More top tips!

Anyway, despite the less than perfect planning (clearly I have become a little blase and too relaxed about this dressing business) we had a good time and I enjoyed the party and the company  immensely.