I wrote about my Slut Walk experiences a few days ago. That was a slightly ‘heavier’ and more serious post. This one will be a little lighter.

As mentioned earlier, I have been eager to do a Slut Walk for quite some time and I was pleased to finally be able to do one. It was especially nice that I was able to do one dressed and that I had my friend Anna with me. It is always nice to have the company of a friend in these big social occasions, especially if you are introverted, as I am.

After walking the five kilometer route Anna, her friend, V, and I were rather tired. I had been telling Anna about Starbucks’ Pumpkin Spice Lattes that I had first experienced in Toronto in 2012 and had been hankering after ever since (note to non South Africans, we only got Starbucks in South Africa this year. We only have two stores so far. Most South Africans have never had a Starbucks coffee, let alone a PSL). She was very intrigued and as we were very close to the Rosebank Starbucks, the three of us set off to track down a PSL.

We arrived in the store and it was pleasantly busy. There were one or two tables available which was good and whilst there was a short queue we did not have to wait to be served. I admit that I am still always a little anxious when speaking to strangers when en femme. I am always concerned that things could go South. A store assistant came up to us whilst we were in the queue in order to take our orders and get a jump on the process to try and speed things up. I was a little nervous but she addressed me as “Ma’am” which always puts me at ease. I gave her my order and my name (Dani) . I was doubly pleased to see that she had written the name on the cup correctly (ie she wrote the female form ‘Dani’ rather than the masculine ‘Danny’). Anna and V ordered their PSLs and we went to a table waiting for our orders to be called out.

I was a little anxious. I really hoped that I had not oversold the PSL and I was also a little concerned that V would be uncomfortable being in public with me (I had never met her before and had no idea about who she was). After a brief wait our drinks were ready and the moment of truth arrived. 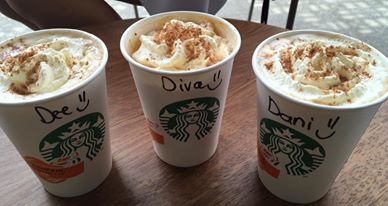 I was relieved to see that both Anna and V enjoyed their lattes. As predicted the first sip was ‘surprising’ but they both said that the drinks were very yummy. We had a very nice natter over our coffees and for quite a while thereafter.

I was also glad to see that my concerns re V were completely unfounded. She seemed genuinely happy to be there. Once again proof that we as transgender people really have far less to worry about than we think. Of course there are real horror stories out there and we do need to be careful but by and large most people are very accepting and tolerant. I sometimes think that we project far more on to other people than is actually out there. In fact, I felt a little bit sorry for V. Anna was very eager to learn more about me as a transgender person and was asking me lots of questions and I fear I dominated the conversation way too much.

After a while I realised that I needed to get going as I had a meeting later that day with my spouse and some potential business ‘associates’. I said my goodbyes and started to go back to my car. I decided that I wanted to stop off at a few shops on the way to my car as I wanted to see if they had any shoes I wanted (don’t judge I am looking for something very specific). On the way I realised that the coffee was making its presence felt in my bladder. This presented me with something of a problem. I have never before been to the toilet in a shopping mall before. I have used toilets in restaurants and theaters before, but somehow these seem ‘safer’. They are smaller, less busy and as you are a paying customer of the restaurant etc you feel somehow more entitled to use the facility. I was also aware of the horror stories you hear of people being assaulted because they are in the ‘wrong’ facility and with all the ‘noise’ about the North Carolina toilet debate in my head, I relaised I just had to brazen it out as I was not going to survive waiting to get home.

I adopted as confident a demeanour as possible and headed towards the public toilets. As I entered the corridor leading to the facilities, I was confronted with a degree of hope. There was a ‘family’ room straight ahead. Perhaps I should use that? At that exact moment I noticed a cleaning crew standing against the wall. It consisted of a man and two women. The man immediately said “Ladies room to the right Ma’am”. I breathed a sigh of relief and walked into the ladies, found a stall and did what needed doing. I washed my hands and left without incident, mentally ticking off another box in my head. Next time the need arises I will probably be less stressed!

Sadly I did not find the shoes I am looking for and headed off to my meeting, collecting my spouse along the way. On arriving in the area of the restaurant that we had planned to meet at we realised that  parking was going to be a problem. I eventually found a spot around the corner, about 500 meters away from the restaurant. I parked without incident and started walking to the restaurant. The paving was slippery and very uneven. I was wearing my most comfortable platform sandals, but they have a very hard plastic sole. Needless to say the hard soles and the uneven paving were not the best combination. I ended up on my bum. Much to my embarrassment and the mirth of the street vendor nearby. Fortunately my pride was hurt more than my body and I was able to stand up and walk the rest of the way to our meeting, which was productive and enjoyable.

We walked in the road when we returned to the car which was ironically the safest thing to do. We returned home and fetched our daughters from their grandparents. A nice way to round off a successful and enjoyable Saturday.