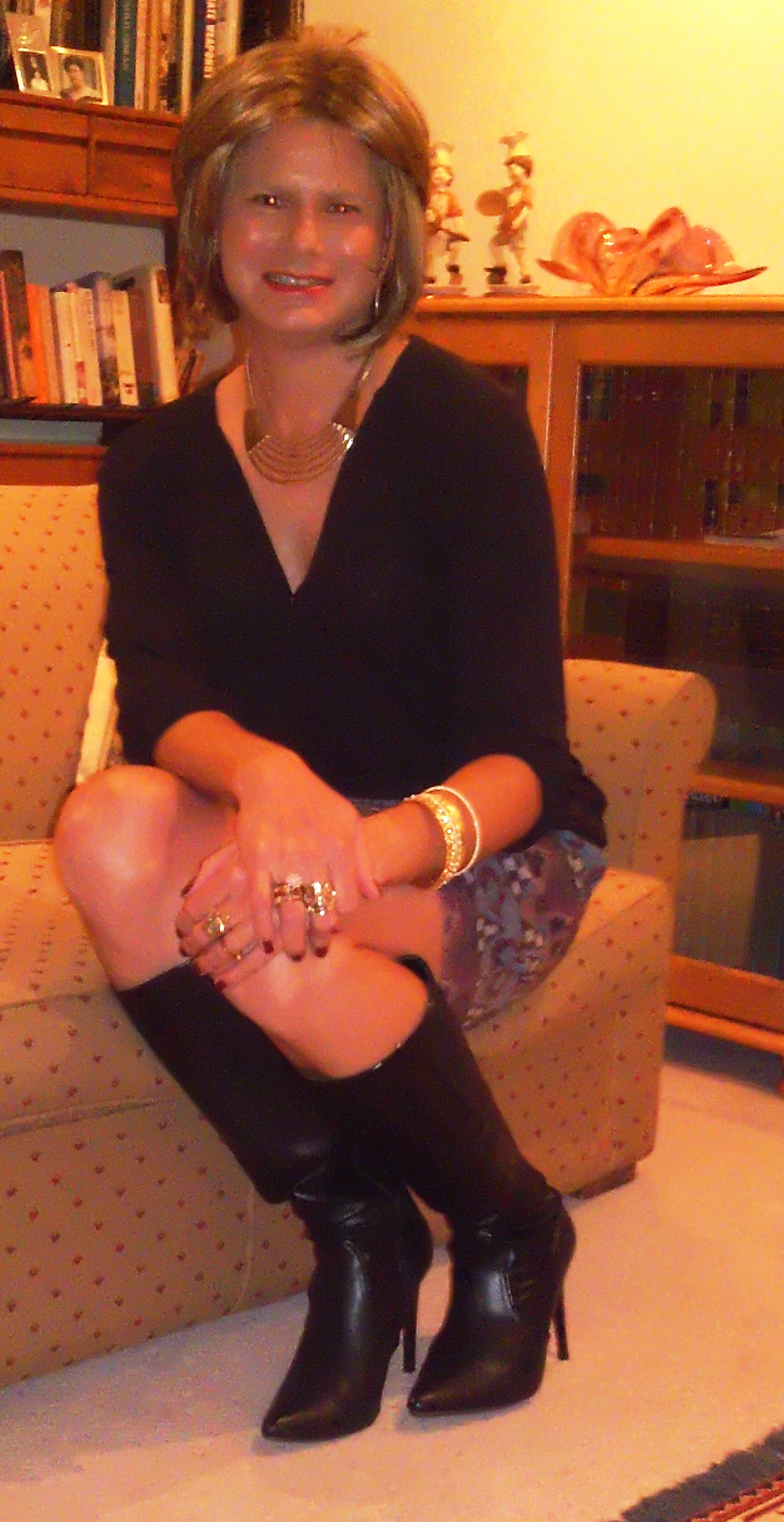 My outfit without the jacket and a view of my nails... Did I mention I was proud of them?

So my wife and I decided to go out this weekend. It was initially a bit touch and go as our initial plans were unfortunately cancelled so we were thinking of staying in but with babysitting arranged and all planned we decided not to let an opportunity slip.

A few weeks ago I went to Wig Beauty and bought a new wig (hint if you are in Gauteng and want a wig this is the place to go for service, fun and range. Their prices are not too bad, but there are cheaper wigs in the world). It was time to try out the new hairstyle. I also thought it was time to give the newly epilated legs an airing. Fortunately the weather has been very nice to skirts were a distinct option. I did however decide to err on the side of caution so I wore boots rather than shoes.

After dropping the girls at their grandparents we returned home and started to get ready. I bathed and shaved the necessary bits before epilating my legs. Whilst all this titivating was going on we heard numerous comings and goings. Our new tenants who we never see or hear decided that this was the day to have visitors and generally be active. We got ready, I chose my sequin skirt, a black top and an off-white leather jacket (donated by my lovely wife) to go with my boots. I toyed with wearing pantyhose but decided it was warm enough without. I did my make up and my nails (I was very proud of my nails, best job I have done I think) and took a few pictures and we were ready to leave.

I would normally have left the house via the back door but this would have taken me right past the tenants’ flat on our property so I decided to leave via the front door and have my wife pick me up at the main gate in the front of the house.

I was standing on the patio, waiting for my wife to bring the car round when I heard a car coming up our street. It was one of our tenants! I sprinted (well what passes for sprinting in stilettos) across the patio, down the path and hid behind a lavender bush. I think I was out of his direct line of sight whilst running across the garden, but you never know. He drove up the driveway and I stayed hidden until my wife came down the drive in her car. I broke cover  and ran across the lawn jumped in the car and we were off!

It seems my despite planning, precautions and a good deal of subterfuge my outings nearly always result in a close encounter of sorts. If not my daughter’s school teachers, then it is work colleagues or our tenants. Oh well at least I can never be accused of leading a dull life.

We had planned on going to our local restaurant and live music venue, Amuse Cafe but it was a little bit early so we decided to head to the mall first. Sadly it was in that in between time, all the shops were closed, the mall was very quiet (last weekend before payday) and the entertainment spots hadn’t got going yet. We did a circuit of one portion of the mall and decided to go and get something to eat.

On arriving at Amuse we realised that one of our friends, the ever lovely Sjarmante Diamante was performing with two other drag artists we had met a few months ago (Shaida Maria Elvira and Cleo Tauris) in a charity drag show. We spent some time catching up with Sjarmante and had a drink before dinner. I had the fish whilst my wife had the chicken. The food was very good, the portions were not too large and the meal was very reasonably priced. We had chocolate brownies for dessert and I thought they were very good. Just as we started dessert the show started.

I was very impressed with the show. Each performer did three songs. Sjarmante has really polished her act since the last time I saw her. She has become very good and seems to have developed her stage presence very nicely. I was very impressed with Cleo’s voice (she sings her own words where as Sjarmante and Shaida lip synched their songs). Shaida’s dancing was excellent and her belly dancing was really very good.

After the show we mingled a little, chatting with some friends who had come to watch the show before we headed home. It was a lovely evening.

I came to the realisation that we have a lovely circle of friends that have totally accepted (well at least it feels that way) into their circle. We are accepted for who we are and are not judged for being too straight, too married or anything. This is a lovely feeling and I hope all the people in our lives (I hope you all know who you are without necessarily being mentioned) realise how much we appreciate your friendship. We really enjoyed Amuse (again).  It is also a very accepting venue. I feel I can be myself, not having to worry about being outed by my voice or having a nasty incident in the toilet (the toilets are effectively unisex so there is no stressing about offending anyone by using the ‘wrong’ one).

The only downside of the evening was that one of the men who we did not know felt the need to grab my wife’s leg whilst we were standing talking to another group of people. What is it with men who think women are there to be pawed? He made no attempt to converse with either of us, he made no apology. Was he trying to chase us away? Did he object to the presence of ‘straight’ (whatever that means in our context) was he straight and did he think this behaviour would help him? I suspect he was simply drunk and thinks nothing of assaulting women. Sadly I didn’t know how to react. picking a fight did not seem to be the best course of action so we just switched sides and I put myself between him and her.

Anyway apart from that it was a lovely night out. It was great to see some friends in an impromptu setting and as always Dirck and his staff’s hospitality and service was spot on.  It was nice to have chance to show off my new hairstyle (thanks for the super kind words Sjarmante) and let my legs loose on an unsuspecting world. Until next time.