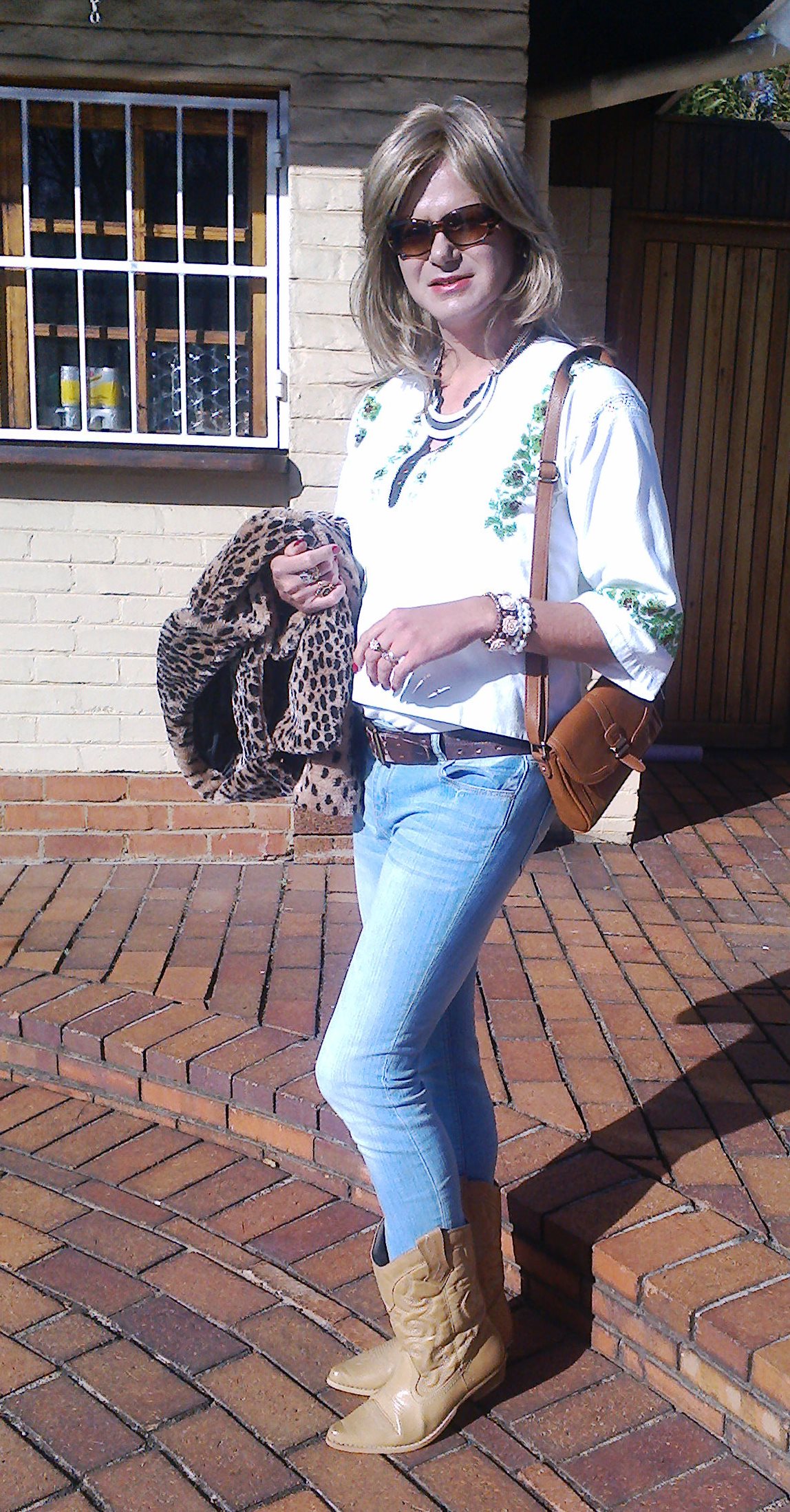 It was (sort of) the first anniversary of our first time out on Saturday. So my lovely wife and I decided to celebrate with a trip to the mall and a dinner for two. We dropped the girls off at their grandparents and returned home to get ready. I had planned my outfit a few days in advance. I was looking for a casual (well what passes for casual with me) look but I needed to be warm as well. This necessitated a last minute change from floral to plain jeans. I decided on cowboy boots, faded blue skinny jeans, a white peasant top, some hippy chic jewelry, peace sign earrings and a jacket. The only jacket I own (we live in a generally warm part of the world) is my trusty leopard print jacket purchased earlier this year, so that is what I would wear. I just hoped that it would work with the rest of the outfit.

After a nice long bath we dressed, took the obligatory photos and headed to the mall. Here is a picture of the whole ensemble. I think it worked quite nicely:

On a side note wearing jeans and boots without high heels caused a bit of a problem for me. I forgot that I was en femme sometimes and started walking in a rather masculine way. I was striding out and not walking ‘properly’. I must remember to focus on this if I wear these type of clothes again. It may also suggest that I am becoming more comfortable (too comfortable) with being out dressed? I think the jacket was a great buy as it can be dressed up with a cocktail dress and heels or worn with jeans and boots for a casual look. I am starting to get the hang of this shopping and coordinating business.

Anyway once we got to the mall my wife told me that there was a sale on false nails at one of the stores. She wanted to check out something else at the door so I went in on my own. I was walking towards the nail section when BAM I walked right past a work colleague! I am not exactly out to anyone that the male me knows other than my wife so this was a bit of a problem. I played it as cool as I could stopped at the nails, looked at them for a while (without actually seeing anything) then headed down the aisle, across another aisle and BAM there she was again! Right in front of me! I turned to the side as casually as I could and made for the exit. Just then my wife came up and said ‘there you are, I lost you!’ I dared not reply as I did not know where my colleague was and I did not want her to hear my voice. I walked on and said nothing, only explaining the situation once we were out of the shop. I was quite rattled I must tell you as this was the closest call I have had whilst out and I was rather nervous for the rest of the outing, but I did not want it to spoil the trip so I carried on as best I could. We walked around a bit more, popped into a few places, did a bit of window shopping and so on, but as I did not want to buy anything it was all rather aimless, which is fine, and I did not try anything on even though we did some very nice clothes. We walked out of main mall and to another mall with more restaurants. We found a place to eat at but felt that it was still too early so we decided to go back to look at the nails as originally intended. On the way back to the shop BAM we walked past yet another (different) work colleague of mine. What are the chances?

We looked at the nails, walked back to the restaurant and had a very nice meal. Sadly after spending a month in France and Italy, the quality just did not compare. The food was not bad, but it just wasn’t as good as what we had become used to. Surprisingly the price was no cheaper than Europe either, despite the exchange rate. The company was however very good and we got to chat and laugh about things, including running into people. I really value, appreciate and cherish these times spent with my best friend, lover and life companion and I would have it no other way… (she had better read this blog now).

At dinner I realised that I had forgotten to put on my peace sign earrings thus negating a good fifty percent of my hippy chic look. Oh dear, this dressing business is so complicated, so much to remember. Maybe I should develop a check list? It actually wasn’t the end of the world but I do think that if I had my ears pierced I would find it easier (I had put my earring clips on, but not the earrings themselves), so anyone looking may have thought I just had some studs or something, I hope. I also forgot to put blush on. Not sure if it is the end of the world for daytime outings, but I do think it would have been an issue at night.

After dinner we decided to go home. We are in the midst of a cold snap and temperatures are hovering around freezing at night so hanging around in the cold was just not a great idea. Also, having spent so much time in the European summer our body clocks have adjusted to the sun going down at 10 pm. Now at home in winter the sun goes down at 5 pm and we think it is nearly bed time, so neither of us were keen for a night of partying. As the kids were sleeping out we took advantage of the situation and had an early night and a full night of uninterrupted sleep. I know, I know we are clearly the last of the party animals!

At home my wife said that she really doesn’t feel comfortable in leather jackets (she had been wearing a leather jacket all day) and was thinking of getting rid of hers. I tried her jacket on and it actually fits quite well. My arms are a bit long, but then my arms tend to be long for some of my men’s jackets as well. Looks like I have scored my second jacket yay! Thank you darling.

Anyway, fortunately both of my colleagues were with other people (husbands, boyfriends or whatever) and they were quite engrossed in their own conversations and I do not think I was recognised. They certainly didn’t seem to recognise me (their body language seemed unchanged and they did not stop talking to the person they were with) which is good. I have however been thinking all weekend  how I would handle this if I am confronted. I have decided that I will be open, honest and simply ‘own it’ (thanks CiCi for the timeous advice). I am who I am and if I am ‘discovered’ I am not going to try to lie, deny or otherwise deceive anyone. I am still not sure I want to come out to the world in general and I still think that this is a private matter but I am not going to lie about who I am.

On that note and in relation to CiCi’s Tedx video above, I would like to encourage more of us to get out there. Explore the world as your true selves. There is no need to hide anymore. We are not doing anything illegal and we have nothing to be ashamed of. The only way we can gain societal acceptance is by entering the world and showing people that we are (mostly) normal people. I also think that we need to push the boundaries a little. Let’s not only go to gay bars or trans* friendly establishments. Let’s get out into the vanilla world and show people we are not to be feared. I am not saying we should throw caution to the wind. We absolutely need to stay safe at all times and some places may not be ideal to visit en femme, but there are safe places where we can interact with cisgender people. I have therefore decided to be a bit braver about speaking to people. In the past I would let my wife do all the talking, which is not only cowardly but odd: whoever saw a female friend order for another female friend at a restaurant. I am fooling no-one so I may as well talk to them.

I certainly think that there is a place for trans* friendly places, whether gay bars or whatever (a big thank you to Trouble and Amuse) and I really appreciate their acceptance of us all. I also know that some people simply do not have the confidence to venture out into the vanilla world and that is also fine, but if you think you can do it, just do it! Own it, enjoy it but do it. Once we as a community gain confidence, we can gain visibility and with visibility comes acceptance. We have the legal right to be who we are, but the societal right needs to be fought for. This takes courage but it can be done. Passing should not be our goal, acceptance is our goal.

For this reason, I believe, us part timers have a massive role to play. Sure, we do our best to look good but we do not and cannot pass completely. People will (eventually) see us for who we are. Whether it is our manly arms, our manly foreheads or our deep voices that gives us away doesn’t matter, what matters is that we show the world that we are dignified, happy people with a right to exist. Post operative transwomen cannot do this. They simply blend too well and anyway they now have no need of acceptance, they are accepted (mostly) as women. Only we part timers can do this and we must therefore do this well. I challenge you to do your part, slowly yes, safely absolutely and of course on your own terms and within your own (not someone else’s) boundaries, but make a start. This will not change society overnight and we may have some unpleasantness on the way, but I am sure it will change.

To conclude, spotting work colleagues is a bit of a stress to say the least and it certainly affected the outing. I did not let it ruin the outing but I cannot deny that it had an effect. Despite that I had a lovely time and I would like to encourage more of my South African sisters to get out there. Perhaps for safety sake we should go en femme, en masse to vanilla venues? Anyone game? I dare you.

PS does anyone else think it VERY funny that one of the sponsors of the Tedx event that CiCi spoke at was Chick-Fil-A?