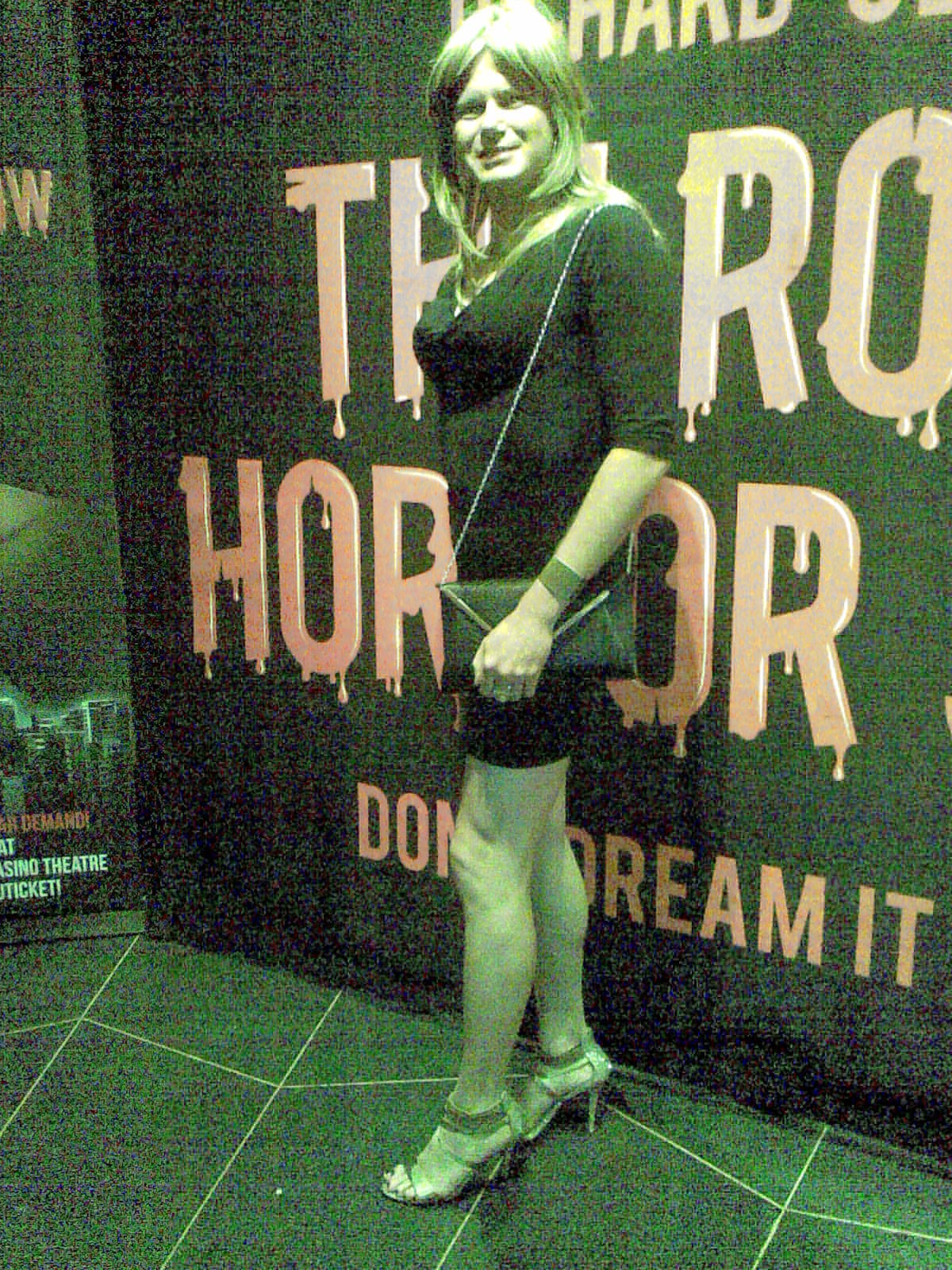 Both sets of grandparents were away for the weekend (how is that for bad planning?) so we had to rely on our weekly child minder for baby sitting. Fortunately our eldest was at a camp for the weekend so we only had the toddler to worry about.

I had bathed and was in the middle of shaving when the phone rang. The baby sitter had finished early and would be able to come sooner than expected if we wanted. RESULT! This meant we could have dinner together before the show, but eeeeek, now I had to hustle!

I finished shaving and started my make up. My wife finished getting dressed and went to fetch the baby sitter. We did not want the sitter to run into me dressed, so I finished up, picked up the tickets and went for a drive whilst waiting for my wife to return. I decided to try driving in my heels (4″ stilettos”). It was very different but I managed well enough. I was driving around and suddenly hit massive traffic. I forgot that there was a concert at the park that afternoon and I had timed things just as people were starting to leave the concert. Oops! I was stuck there standing still with people walking right past the car, but nobody seemed to notice or give a damn.

I managed to get out of the traffic jam when my wife called to say she was home. I drove back home (avoiding the area around the park) and picked my wife up from the pavement thus avoiding the babysitter!

I drove us to the venue. At one of the traffic lights a street vendor gave both of us a loooooong look paying special attention to my legs! Then at another intersection a beggar called me ‘madam’. Normally in guy mode, I am able to quickly and assertively brush these guys off. En femme, not so easy. He hung around looking at us, looking at my cleavage and legs. I tried all my guy tricks on him, but he stayed until the light changed. Everyday sexism much? This crossdressing business gives one a real insight into some of the bs women face everyday.

We arrived and went through the security check. I had to remember to use the queue with the female security guard (this is SA and we are prissy about such things). She looked in my handbag and ran the metal detector around my boobs… We went on our way. We walked around for a bit, found the theater and then found a restaurant nearby. The waiters and waitresses were very polite and called us ‘ladies’ all the time. I smiled sweetly and let my wife do all the talking. We ordered steaks and salads.The steaks were excellent and we chatted away. We saw a few people in drag (obvious) heading away from the theater. They must have been to the matinee.
And I also saw a couple walking in the opposite direction and one half of the couple must have been a crossdresser. She was definitely ‘passing/blending’ but was clearly not a genetic girl.  She looked great and gave me confidence. (I later looked for her at the theater but didn’t see her, so she must have just been visiting the casino, very cool ).

After dinner we walked around a little… The floors were a nightmare: they are uneven cobblestone type things (the whole place is themed around a Tuscan village) and they are highly polished. My wife was slipping all over the place but I refused to look like the stereotypical ‘tranny’ so I staid balanced and ladylike!

We arrived at the theater and were met by a number of ‘ushers’ at the door they were all genetic girls dressed in beautiful flared dresses. They looked great they were very complimentary welcoming us (they said ‘good evening ladies’) and gave us our ‘participation packs’.

Having had a coke and a coffee, I needed the toilet (as did my wife)… Thus arose the question, which toilet to use? I know, I know, how stereotypical, but when the need is urgent this becomes a rather, um, burning question!

I decided to go with the ladies and in I went. Fortunately there were 2 open stalls and we were able to avoid a wait, which could have led to more interaction than I was comfortable with. I decided to break protocol and fixed my make up in the stall to avoid having to get into conversation with anyone.
I came out and oh my word… there was a queue of about 20 women all waiting to use the toilets! I felt terrible having wasted time titivating in the stall. Ah well… I did learn that women are WAY chattier in than men in this place!

We then went to find our seats.

Again we were met by an usher… She welcomed us and told me that I looked ‘fabulous‘ (it was very definitely addressed to me). It was great to receive a compliment but it meant that she had clocked me I am sure. I smiled sweetly said ‘thank you’ in my least possible masculine voice and went to our seats!

Then the fun started. Some of the ushers were men, very professionally made up, in dresses (as opposed to crossdressers)  and they were moving among the audience doing some outrageous things, they would jump on the men’s laps and bounce around screaming orgasmically, or stand behind someone and throw the dress over their head and scream orgasmically etc. All a bit of fun. One of them came up to us, stopped and stared. Then looked harder at me, took his/her torch and shined it on my face, then down my cleavage. Then he turned around and said ‘fuck me, you almost had me fooled’. I laughed it off and said wait until I open my mouth. S/he laughed back.

The show was great. Riff-Raff and Frank were the 2 outstanding talents for me and the band was superb!
We took a few pics at intermission and I posed at the entrance with the sign showing ‘The Rocky Horror Show’. Having been clocked I felt I may as well risk ‘standing out’. Sadly my cell phone camera is rubbish in doors.

We left, again braving the dodgy floor and drove home. My wife drove us as I needed to do a quick transform in the car.
When we were close to home I pulled a pair of jeans over my dress, pulled on a t shirt, replaced the shoes with manly sandals and took off my wig asI did not want to shock the baby sitter.

Just as we were two houses away from our house, on a quiet suburban street, a cop pulled us over and asked us where we are going. We told him we were going home and that our house was right there. He then demanded we open the gate with the remote. Which we (foolishly) did. Luckily he was a legit cop and not a burglar posing as a cop and he let us go once the gate opened. I was outraged. What right did he have to harass us like that? Why was he so rude (he was very rude) etc? Maybe the SA Police Service has improved their tranny monitoring intelligence after all…

Anyway we got home ok and apart from the cop it was a lovely evening.